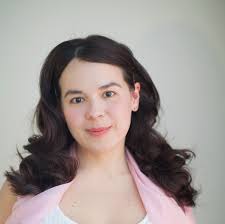 The 2019 Pen Pal Author, Heidi Heilig, will be at Linebaugh Public Library on Monday, October 21, at 6:30 p.m. The annual Pen Pal event is sponsored by Friends of Linebaugh Library.

Heidi's books include For Muse of Fire, The Girl from Everywhere and The Ship Beyond Time, all top sellers in Teen and Young Adult Fiction.

Heidi grew up in Hawaii where she rode horses and raised peacocks, and then she moved to New York City and grew up even more, as one tends to do. Her favorite thing, outside of writing, is travel, and she has haggled for rugs in Morocco, hiked the trails of the Ko'olau Valley, and huddled in a tent in Africa while lions roared in the dark.

She holds an MFA from New York University in Musical Theatre Writing and has written books and lyrics for shows including “The Time Travelers Convention”, “Under Construction”, and “The Hole”. She lives in Brooklyn with her husband, her son and their pet snake.

With the first author coming in 1990, Friends of Linebaugh Library has been sponsoring the Pen Pal Author event for twenty-nine years. Each Pen Pal author also speaks in several area schools. The event at Linebaugh is free and open to the public. The author will have copies of her books to sign and sell. Accepted payment is by credit card only.